Capturing the heart of our
Milky Way Galaxy directly overhead

Our project report is available below, for download.  The 18 page project report provides an outline of the main processes and technical considerations employed for this project, including methodologies, field photography, image processing, results and discussion. 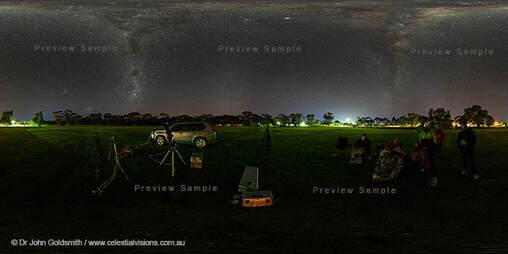 Heart of the Galaxy above the
Westonia Community,
Western Australia.

The image to the right is a preview sample of the 360° imaging recorded at the Westonia Community astronomy evening, which was held on 1st August 2019.   The community event included a tour of the night sky, viewing through a large refractor telescope, practical astrophotography and a demonstration of 360° astrophotography, in which the entire night sky is recorded in a mosaic of images.

The 360° view (right) can be presented in a variety of ways.  This image is shown in "equi-rectangular" form, with a 2:1 aspect ratio (360°:180°).  The equi-rectangular view appears distorted, due to the representation of the full 360° image, onto a flat, 2 dimensional image.   When viewed via Virtual Reality VR viewers, the perspective appears highly naturalistic.   The VR images provided below can be navigated and explored by the user.
"Capturing the heart of the Milky Way galaxy directly overhead".
360° image, Westonia, Western Australia.

The 360° image below was recorded on 1st August 2019, during a community astronomy event, held at Westonia, Western Australia.  The Westonia townsite is located approximately 350 km east of the capital city, Perth.  This distance away from Perth is far enough to escape most of the light pollution of the city.  The entire shire population of Westonia is less than 300 persons, however, the proximity of a nearby gold mine cause some light pollution.  Even from within the centre of the Westonia town, the night sky provides a spectacular view of the heart of our Milky Way Galaxy, as it appears directly overhead.

Dark sky view of the heart of our Milky Way Galaxy.
Near Hyden, Western Australia.

When observed from a dark sky location, in this case, near Hyden, Western Australia, our Milky Way appears as a spectacular band of glowing light crossing the entire sky, from horizon to horizon.  This image records the heart of the Milky Way directly overhead.  Contrast this image with the view seen from light polluted urban areas, such as the city of Perth image.
Dark sky location
Wave Rock, near Hyden, Western Australia.

The image below shows the centre of our Milky Way Galaxy directly overhead, at Wave Rock, near Hyden, Western Australia.
Natural erosion of the landscape has formed Wave Rock, giving rise to its distinctive form and shape.
​
The effect of urban light pollution is severe.

In an urban environment, light pollution causes a dramatic loss of visibility of the night sky. In this 360° image (shown below) of Western Australia's capital city, Perth (as viewed from the South Perth Foreshore), very few stars are visible due to the impact of light pollution.   The heart of our Milky Way, appearing directly overhead, is barely visible.   Contrast this view with the above dark-sky location.
Comparison of light polluted view and dark-sky view of the Milky Way directly overhead:
These images show the impact of urban light pollution and its impact on our ability to view the night sky.  The image on the left was photographed from the South Perth foreshore, overlooking the Swan River and the centre of Perth.  Due to the very bright night-time ambient lighting, the image on the left was exposed approximately five "f" stops LESS exposure than the image on the right, which is correctly exposed for dark-sky conditions.   If both images were photographed with the same exposure, the city image would be completely over-exposed due to the bright ambient light.  In the city, the Milky Way is barely visible, in contrast to the spectacular view of the Milky Way from the dark-sky location.
The view from Albany, Western Australia.

This image was photographed from near the summit of Mount Melville, Albany, Western Australia, by photographer Luke Busellato.   Albany is home to almost 35,000 people and is located approximately 400 kilometres south east of the capital city, Perth.   Despite some light pollution from Albany, from the vantage point of Mount Melville, the heart of our Milky Way galaxy is easily visible and appears almost directly overhead.
Thankyou to our sponsors and supporters.

This project is supported by the National Science Week 2019 (Australia), in collaboration with the Westonia Community Resource Centre, with project collaboration by Dr John Goldsmith, Dr Chris Thorne and Luke Busellato.

Enquiries are welcome regarding proposed content use.
Please contact Dr John Goldsmith via the contacts page on www.celestialvisions.com.au