Celestial Visions is proud to showcase a select group of astrophotographers, united by a shared passion for the cosmos, the wonders of astronomy and astrophotography.  This portfolio collection celebrates and honors key members of our community and their inspired astrophotography, curated by Dr John Goldsmith.

​Please note all text and images are copyright by the respective copyright holders.   Links are provided below to external web sites and social media sites, which are managed by the respective photographers, these external sites are not managed by Celestial Visions.
​
Enquiries regarding publication or usage are welcome.  Contact Celestial Visions via the contacts page.
​ 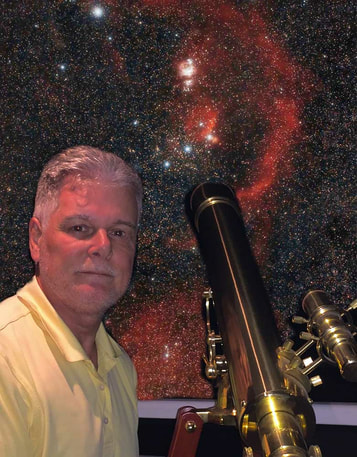 Born in 1954 in the UK, Paul's interest in astronomy was inspired by his father who was a keen telescope maker and lunar observer in the 60's and 70's and a friend of the late Sir Patrick Moore to whom he donated several of his telescopes. After many years of manually guided film emulsion astrophotography under the less than ideal British night skies Paul's career in the oil and gas industry took him away from the UK and left him little time to continue his passion.  Eventually in 2001 Paul found himself working in Perth in Western Australia. Here were the dark skies that he had only dreamed of and with the complete transformation of astrophotography with the introduction of CCD's Paul devoted himself to mastering the new technology and capturing the glories of the night sky. Retiring in 2011 Paul observes and photographs the night sky from his backyard in Swan Valley North of Perth using both refractors and Schmidt–Cassegrain reflectors and photographs the sun using a Narrow Band Hydrogen-alpha telescope. His endeavours have been rewarded with awards at the CWAS "David Malin Awards" and the annual WA Astrofest Astrophotography Competition.